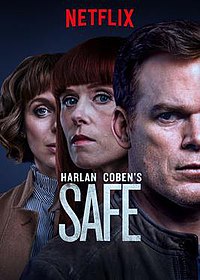 Safe is a British television drama mini-series created by crime author Harlan Coben and written primarily by screenwriter Danny Brocklehurst. Set in England, the series is a production by Canal+, with C8 airing the show in France, and Netflix streaming the show internationally outside France. The series began filming in Manchester, Liverpool, and Cheshire in July 2017. It consists of eight episodes that premiered in 190 countries on 10 May 2018.

Safe focuses on Englishman Tom Delaney (Hall), a paediatric surgeon and widowed father of two teenage daughters. He is struggling to connect with his daughters as they still grieve the loss of his wife from cancer one year prior. After his 16-year-old daughter Jenny goes missing, Tom uncovers a web of secrets as he frantically searches for her.