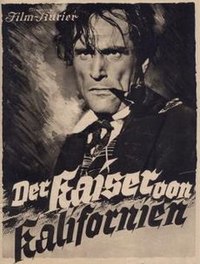 The Kaiser of California 1936

Der Kaiser von Kalifornien (English: The Emperor of California), is a 1936 film that has the distinction of being the first western film made in Nazi Germany. Some exterior scenes were even shot on location in the United States at Sedona, Arizona, the Grand Canyon and at Death Valley in California.