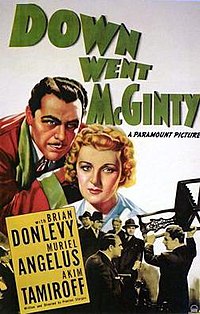 The Great McGinty is a 1940 political satire comedy film written and directed by Preston Sturges, starring Brian Donlevy and Akim Tamiroff and featuring William Demarest and (in her final screen appearance) Muriel Angelus. It was Sturges's first film as a director; he sold the story to Paramount Pictures for just $10 on condition he direct the film. Sturges received an Oscar for Best Original Screenplay.

Dan McGinty (Brian Donlevy) is a bartender in a banana republic who recounts his rise and fall to the bar's dancing girl and an American customer. The customer was a trusted bank employee who can no longer return to the United States and his family because he is wanted by the law after falling to temptation and stealing from the bank. McGinty is in a similar situation, but in his case it is due to "one crazy minute" of honesty rather than one of dishonesty. In a long flashback, he explains.