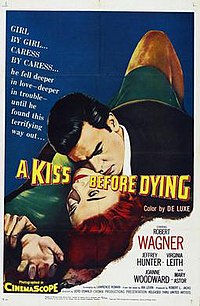 A Kiss Before Dying is a 1956 American color film noir, directed by Gerd Oswald in his directorial debut. The screenplay was written by Lawrence Roman, based on Ira Levin's 1953 novel of the same name, which won the 1954 Edgar Award for Best First Novel. The drama stars Robert Wagner, Jeffrey Hunter, Virginia Leith, Joanne Woodward, and Mary Astor. It was remade in 1991 under the same title.

In 1956, Bud Corliss is an ambitious university student who is wooing fellow student Dorothy Kingship purely for her father's mining fortune. When he discovers that Dorothy is pregnant with his child, he realizes she is quite likely to be disinherited by her father, Leo Kingship. She does not care about that, saying she feels "like me" for the first time in her life, free of her father's control. Bud assures Dorothy that he will take care of her, hesitates when Dorothy insists on marrying, but then seemingly agrees to it.