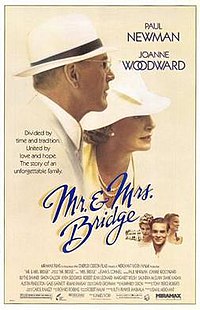 Mr. & Mrs. Bridge is a 1990 American drama film based on the novels by Evan S. Connell of the same name. It is directed by James Ivory, with a screenplay by Ruth Prawer Jhabvala, and produced by Ismail Merchant.

The story of a traditionally minded family living in the Country Club District of Kansas City, Missouri, during the 1930s and 1940s. The Bridges grapple with changing mores and expectations. Mr. Bridge (Paul Newman) is a lawyer who resists his children's rebellion against the conservative values he holds dear. Mrs. Bridge (Joanne Woodward) labors to maintain a Pollyanna view of the world, against her husband's emotional distance and her children's eagerness to adopt a world view more modern than her own.