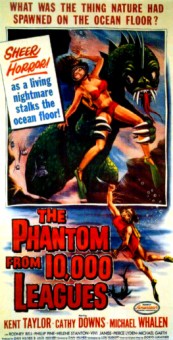 The Phantom from 10,000 Leagues is a 1955 independently made American black-and-white science fiction monster film, produced by Jack Milner and Dan Milner (who also directed), that stars Kent Taylor and Cathy Downs.

A mysterious, man-sized monster kills a fisherman at sea. Biologist Ted Baxter (Kent Taylor) and Federal Agent William Grant (Rodney Bell) discover the man's body, washed up on the beach and covered with radioactive burns. They decide to investigate the strange death. After two young divers are killed by the monster, Ted and Grant decide to go dive in the same location and investigate the area. They discover a glowing radioactive rock being guarded by the monster. Grant shoots it with a harpoon gun, allowing them to escape, but the creature survives.