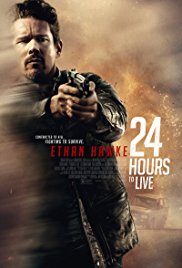 24 Hours to Live is a 2017 science fiction action thriller film directed by Brian Smrz and starring Ethan Hawke, Xu Qing, Paul Anderson, Liam Cunningham, and Rutger Hauer. It follows a career assassin who is brought back to life for 24 hours to seek revenge and redemption. The film premiered at the Austin Film Festival on October 26, 2017, and was released on VOD and in select theaters on December 1, 2017.

In South Africa, a convoy of interpol agents led by Lin (Xu Qing) transport a prisoner, Keith. At a checkpoint, they are ambushed. Most of the agents are killed, but Lin escapes with Keith.