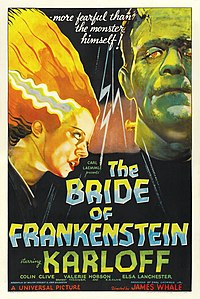 The Bride of Frankenstein is a 1935 American science fiction horror film, and the first sequel to Universal Pictures' 1931 film Frankenstein. It is widely regarded as one of the greatest sequels in cinematic history, with many fans and critics considering it to be an improvement on the original Frankenstein. As with the first film, Bride of Frankenstein was directed by James Whale and stars Boris Karloff as the Monster. The sequel features Elsa Lanchester in the dual role of Mary Shelley and the titular character at the end of the film. Colin Clive reprises his role as Henry Frankenstein, and Ernest Thesiger plays the role of Doctor Septimus Pretorius.

On a stormy night, Percy Bysshe Shelley (Douglas Walton) and Lord Byron (Gavin Gordon) praise Mary Shelley (Elsa Lanchester) for her story of Frankenstein and his Monster. She reminds them that her intention for writing the novel was to impart a moral lesson, the consequences of a mortal man who tries to play God. Mary says she has more of the story to tell. The scene shifts to the end of the 1931 Frankenstein, in 1899.