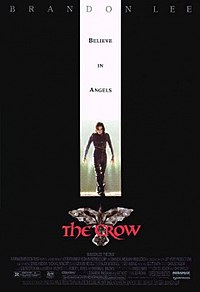 The Crow is a 1994 American superhero film directed by Alex Proyas, written by David J. Schow and John Shirley. It stars Brandon Lee in his final film appearance as Eric Draven, a murdered musician who is resurrected to avenge his death and that of his fiancée. The film is based on James O'Barr's comic of the same name.

On October 30, Devil's Night in Detroit, Sergeant Albrecht is at the scene of a crime where Shelly Webster has been beaten and raped. Her fiancé, musician Eric Draven, lies dead on the street after having been stabbed, shot, and thrown out the window. The couple had planned on getting married the following day, Halloween. As he leaves for the hospital with Shelly, Albrecht meets a young girl, Sarah, who says that she is their friend, and that they take care of her. Albrecht reluctantly tells her that Shelly is dying.