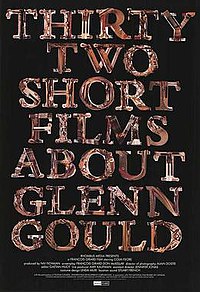 Thirty Two Short Films About Glenn Gould is a 1993 Canadian biographical anthology film about the pianist Glenn Gould, played by Colm Feore. It was directed by François Girard, with a screenplay by Girard and Don McKellar.

With memories revolving around the family's cottage near Lake Simcoe, Glenn Gould recalls how in his childhood, he had ostensibly made the decision to become a concert pianist at age five. In fact, he believes his mother had already chosen that career for him. He recalls being able to read music before he could read books, and learned the music of Johann Sebastian Bach from his mother. Gould later imagines interviewing himself, in which he confronts himself about why he chose to quit giving concerts at the age of 32, preferring to communicate to his audience through media instead. Gould reminds himself that the musician is inescapably an autocrat, no matter how benign.