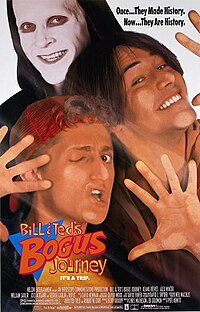 Bill & Ted's Bogus Journey is a 1991 American science fiction comedy film, and the feature directorial debut of Pete Hewitt. It is the second film in the Bill & Ted franchise, and a sequel to Bill & Ted's Excellent Adventure (1989). Keanu Reeves, Alex Winter and George Carlin reprise their roles. The film, which partially spoofs The Seventh Seal, received mixed reviews from critics, but has since gained a cult following like its predecessor.

The music of Wyld Stallyns has created a utopian future society. In 2691, former gym teacher turned terrorist Chuck De Nomolos attacks the Bill & Ted University and steals a time-traveling phone booth, intending to alter the history of what he considers to be a foolish and frivolous society by sending evil robot replicas of Bill and Ted back to the late 20th century to prevent the originals from winning the San Dimas Battle of the Bands. Rufus attempts to stop De Nomolos but seemingly becomes lost in the circuits of time.