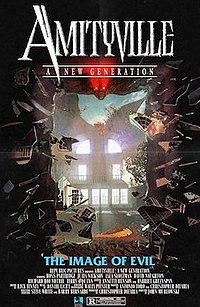 Amityville: A New Generation is a 1993 American supernatural horror film directed by John Murlowski. It is the seventh film based on the Amityville Horror. It was released direct to video in 1993. Republic Pictures released this movie in R-rated and unrated versions. Lionsgate Home Entertainment (under license from FremantleMedia North America) has released this film to DVD in July 2005.

Keyes Terry is an art photographer who is given a mirror by a homeless person he meets on the streets. After taking the mirror home, he eventually realizes that it is possessed with the spirit of his father, Franklin Bronner, who murdered his family on Thanksgiving with a shotgun in the original Amityville house.