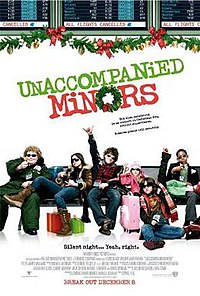 Unaccompanied Minors (also known as Grounded in the United Kingdom and Ireland) is a 2006 Christmas comedy film directed by Paul Feig and starring Lewis Black, Wilmer Valderrama, Tyler James Williams, Dyllan Christopher, Brett Kelly, Gia Mantegna, and Quinn Shephard. It is based on a true story by Susan Burton first told on the public radio show This American Life, under the title "In the Event of an Emergency, Put Your Sister in an Upright Position". The film was released on December 8, 2006 by Warner Bros. Pictures, and grossed $21.9 million against a $26 million budget.

Spencer Davenport and his sister Katherine must fly from California to Pennsylvania on Christmas Eve to spend the holidays with their dad. During their layover at the Hoover International Airport in Washington DC, a massive blizzard grounds all planes and cancels all flights, and the siblings are sent to the anarchic UM (Unaccompanied Minors') room, where they meet Christmas-spirited smarty-pants Charlie Goldfinch, surly tomboy Donna Malone, arrogant rich girl Grace Conrad, and mysterious Beef Wellington.