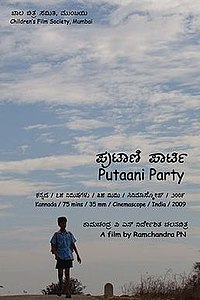 Putaani Party (Kannada: ಪುಟಾಣಿ ಪಾರ್ಟಿ, English: The Kid Gang) is a 2009 Kannada language feature film. Produced by Children's Film Society, India, the film was shot in a village called Honnapura situated near the town of Dharwad in South India. The film uses local actors, most of them first timers who are new to the medium of films. The film has a particular dialect of Kannada that is spoken by a few in that part of India.

A Gram Panchayat (village governing body) in rural India facilitates the functioning of the Makkala Samiti (Children’s Committee) – a children’s body elected by the children themselves.