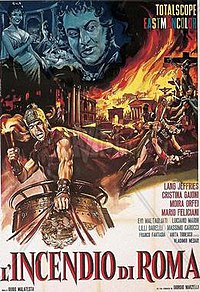 Fire Over Rome is a 1965 Italian peplum film directed by Guido Malatesta.

After successfully campaigning in Gaul for several years, Consul Marcus Valerius arrived back in Rome with his legion. He and his men were looking forward to celebrating their return with their families and friends. The fearless warrior expected his Emperor to be pleased with his conquests, but Nero showed little interest. Other priorities were far more important.