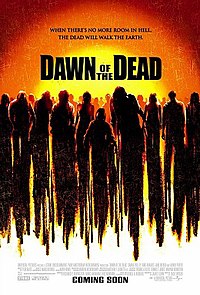 Dawn of the Dead is a 2004 American action horror film directed by Zack Snyder and written by James Gunn. It is the remake of George A. Romero's 1978 film, and stars Sarah Polley, Ving Rhames, Jake Weber, and Mekhi Phifer. A handful of human survivors taking refuge in a suburban Milwaukee, Wisconsin shopping mall are surrounded by swarms of zombies. Ty Burrell, Michael Kelly, Kevin Zegers, and Lindy Booth play supporting roles; the original's cast members Ken Foree, Scott Reiniger, and Tom Savini appear in cameos. Dawn of the Dead is Snyder's film directorial debut. The film was released by Universal Pictures on March 19, 2004, and grossed $102 million worldwide against a budget of $26 million.

After finishing a long shift as a nurse at the Milwaukee County Hospital, Ana returns to her suburban neighborhood and her husband Louis. Caught up in a date night, they miss an emergency news bulletin. The next morning, a girl from the neighborhood enters and kills Louis, who immediately reanimates as a zombie and attacks Ana. She flees in her car, crashes, and passes out. Upon waking, she joins police sergeant Kenneth Hall, electronics salesman Michael, petty criminal Andre and his pregnant wife, Luda. They break into a nearby mall and are attacked by a zombie security guard, who slightly bites Luda. Three guards — C.J., Bart, and Terry — make them surrender their weapons in exchange for refuge. They split into groups to secure the mall. On the roof, they see another survivor, Andy, who is stranded in his gun store across the zombie-infested parking lot. During this time, a broadcast from a television features a group of cops burn the corpses of zombies and introduce the viewers to shoot the zombies in the head to kill them quickly, enabling the survivors to prioritize headshot for the zombies from now on.