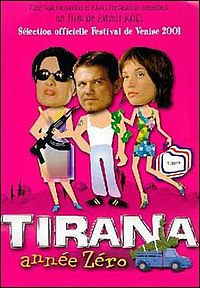 Tirana Year Zero (Tirana, année zéro), is a 2002 Albanian film produced, written and directed by Fatmir Koçi. It tells the story of a young couple in post-communist Albania, at a time when many Albanians left the country in search for a better life abroad.

The protagonist of the movie is Nik, who lives in the capital of Albania, Tirana, along with his mother and father. He is in love with a beautiful girl named Klara, who wants to move to Paris to be a model. Nik makes his living with an old truck that belonged to his father, who is now sick, and seemingly dying.