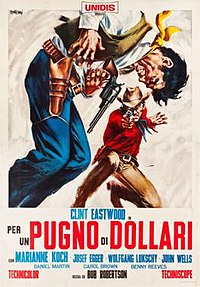 A Fistful of Dollars ( titled on-screen as Fistful of Dollars) is a 1964 Spaghetti Western film directed by Sergio Leone and starring Clint Eastwood in his first leading role, alongside John Wells, Marianne Koch, W. Lukschy, S. Rupp, Jose Calvo, Antonio Prieto, and Joe Edger. The film, an international co-production between Italy, West Germany, and Spain, was filmed on a low budget (reported to be $200,000), and Eastwood was paid $15,000 for his role.

An unnamed stranger arrives at the little town of San Miguel, on the Mexico–United States border. Silvanito, the town's innkeeper, tells the Stranger about a feud between two smuggler families vying to gain control of the town: the Rojo brothers (Don Miguel, Esteban and Ramón), and the family comprising town sheriff John Baxter, his matriarchal wife Consuelo, and their son Antonio. The Stranger (in order to make money) decides to play these families against each other. He demonstrates his speed and accuracy with his gun, to both sides, by shooting with ease the four men who insulted him as he entered town.