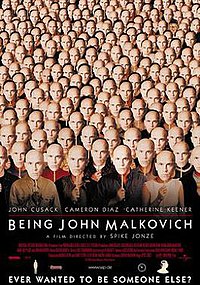 Being John Malkovich is a 1999 American fantasy comedy-drama film directed by Spike Jonze and written by Charlie Kaufman, both making their feature film debut. The film stars John Cusack, Cameron Diaz, and Catherine Keener, with John Malkovich as a satirical version of himself. Cusack plays a puppeteer who finds a portal that leads into Malkovich's mind.

Craig Schwartz is an unemployed puppeteer in New York City, in a forlorn marriage with his pet-obsessed wife, Lotte. He finds work as a file clerk for Dr. Lester on the seventh-and-a-half floor of the Mertin-Flemmer building, which is a floor between the 7th and 8th where the ceiling is very low. He soon develops an attraction to co-worker Maxine Lund, who does not return his affections. While filing, Craig discovers a small hidden door. He crawls through it into a tunnel and finds himself inside the mind of actor John Malkovich. After about 15 minutes, Craig is ejected, landing on the side of the New Jersey Turnpike. He tells Maxine about the door, and she realizes they can sell the experience for profit.