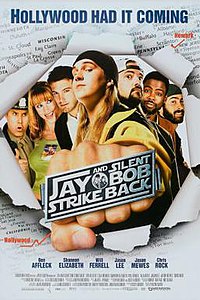 Jay and Silent Bob Strike Back 2001

Jay and Silent Bob Strike Back is a 2001 American buddy comedy film written and directed by Kevin Smith, the fifth to be set in his View Askewniverse, a growing collection of characters and settings that developed out of his cult-favorite Clerks. It focuses on the two eponymous characters, played respectively by Jason Mewes and Smith. The film features cameo appearances from Jason Lee, Ben Affleck, Joey Lauren Adams and Shannen Doherty among many others. The title and logo for Jay and Silent Bob Strike Back are direct references to The Empire Strikes Back.

Upon receiving a restraining order from Randal Graves (Clerks) for selling drugs outside the Quick Stop, Jay and Silent Bob learn from Brodie Bruce (Mallrats) that Bluntman and Chronic, the comic book based on their likenesses, is being adapted by Miramax Films. The pair visit Holden McNeil (Chasing Amy), co-writer of Bluntman and Chronic, and demand royalties from the film, but Holden explains he sold his share of the rights to co-creator Banky Edwards. Seeing the negative reaction the film has received online, the pair set out for Hollywood to prevent the film from tainting their image, or at least to receive the royalties owed them.