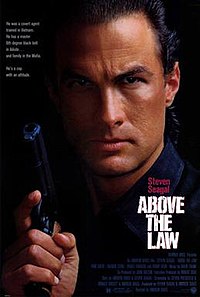 Above the Law (also known as Nico: Above the Law, or simply Nico) is a 1988 American crime action film written, produced and directed by Andrew Davis. It marked the film debut of Steven Seagal, and stars Pam Grier, Sharon Stone, Ron Dean and Henry Silva. Seagal plays Nico Toscani, an ex-CIA agent, Aikido specialist and a Chicago policeman who discovers a conspiracy upon investigating the mysterious shipment of military explosives seized from a narcotics dealer. The film originated after a successful screen test, financed by Michael Ovitz, leading to Seagal being offered a contract by Warner Bros. The film was set and filmed on location in Chicago. The film premiered in the United States on April 8, 1988.

Sergeant Nico Toscani, who traces his roots to Palermo, Sicily, is a detective in the Chicago Police Department's vice squad. At an early age he had become interested in martial arts, and moved to Japan to study them. In 1969, Toscani was recruited to join the CIA by Nelson Fox and was involved in covert operations on the Vietnamese-Cambodian border during the Vietnam War. There, he became disgusted with DCI Kurt Zagon, who tortured prisoners. A stand-off occurred when Toscani tried to stop a torture session, and he left the CIA. Toscani returned to Chicago, joined the police department, and got married.