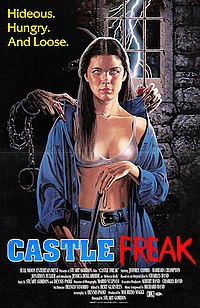 Castle Freak is a 1995 American direct-to-video horror film directed by Stuart Gordon. The film stars Jeffrey Combs who portrays John Reilly, an American recovering alcoholic who inherits an Italian castle when a distant relative passes away. John travels to Italy with his estranged wife Susan (Barbara Crampton) and blind daughter Rebecca (Jessica Dollarhide). The three plan to stay at the castle, but unbeknownst to them, a freakish monster locked away in the basement of the castle is about to escape and commit a series of murders. The police place John as the prime suspect, leading him to confront his alcoholism, fight the demon and prove himself innocent.

After inheriting a 12th-century castle which belonged to a famed Duchess, John Reilly and his family, including his wife Susan and their blind teenage daughter Rebecca, travel to Italy to visit. Susan blames John for the death of their five-year-old son in a drunk driving accident which also cost their daughter her eyesight. On the advice of the estate's executor, the three plan to stay at the castle until they can liquidate the estate. Unbeknownst to them, the Duchess' son, Giorgio Orsino, who was kept imprisoned and tortured by the Duchess in revenge for her husband leaving her, still lives in the dungeons of the castle.