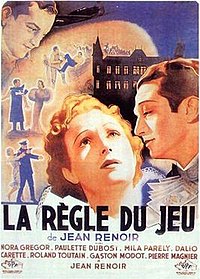 Aviator André Jurieux lands at Le Bourget Airfield outside Paris after crossing the Atlantic in his plane. He is greeted by his friend Octave, who tells André that Christine the Austrian-French noblewoman André loveshas not come to greet him. André is heartbroken. When a radio reporter comes to broadcast André's first words upon landing, he explains his sorrow and denounces Christine. She is listening to the broadcast in her Paris apartment while attended by her maid, Lisette. Christine has been married to Robert, Marquis de la Chesnaye for three years. For two years, Lisette has been married to Schumacher the gamekeeper at Robert's country estate, La Colinière in Solognebut she is more devoted to Christine than to her husband. Christine's past relationship with André is openly known by her husband, her maid and their friend Octave. After Christine and Robert playfully discuss André's emotional display and pledge devotion to one another, Robert excuses himself to make a telephone call. He arranges to meet his mistress Geneviève the next morning.