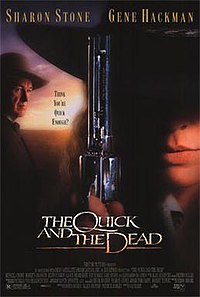 The Quick and the Dead is a 1995 American revisionist Western film directed by Sam Raimi, and starring Sharon Stone, Gene Hackman, Russell Crowe and Leonardo DiCaprio. The screenplay was written by Simon Moore but includes contributions from Joss Whedon. The story focuses on "The Lady" (Stone), a gunfighter who rides into the frontier town of Redemption, controlled by John Herod (Hackman). The Lady joins a deadly dueling competition in an attempt to exact revenge for her father's death.

In 1881, a wanderer known only as "The Lady" arrives in the Old West town of Redemption, which is ruled by a ruthless outlaw named John Herod. Herod announces the opening of Redemption's annual fast draw single elimination shooting tournament with the following rules: any contestant may challenge any other, no challenge can be refused, every contestant must fight once per day, and a fight continues until one contestant either yields or dies. The Lady announces her participation, insisting that she is only interested in the large cash prize.