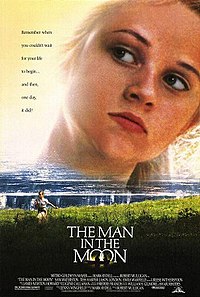 The Man in the Moon is a 1991 American coming of age drama film. It was directed by Robert Mulligan, who then retired following a 40-year career, and features the film debut of Reese Witherspoon.

In the summer of 1957, Danielle "Dani" Trant is a 14-year-old girl in Louisiana who, according to her father, is "too big to be running off by herself." Dani and her older sister Maureen, who is going off to college in the fall, are very close. Maureen helps take care of their younger sister, Missy, while their mother Abigail is pregnant. Dani however prefers to listen to her Elvis Presley records and run off to the neighbor's creek to go skinny dipping. It is here that she meets her new neighbor, 17-year-old Court Foster. Court kicks Dani out of his creek. When Dani goes home, her mother tells her to wash up because an old childhood friend is coming for dinner with her children. The Trants' old friend turns out to be a widow, Mrs. Foster with her three sons Court, Dennis, and Rob. When Dani realizes who Court is, the two dislike each other. Court calls Dani "a little girl". When Dani's father Matthew tells Dani to accompany Court into town for groceries, Dani and Court drive into town and start to get along. Dani finally realizes that she is in love with Court.