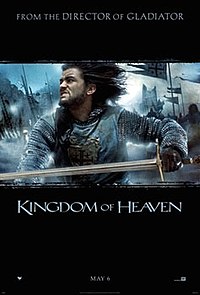 In 1184 France, Balian, a blacksmith, is haunted by his wife's recent suicide. A Crusader passing through the village introduces himself as Balian's father, Baron Godfrey of Ibelin, and asks him to return with him to the Holy Land, but Balian declines. After the town priest reveals that he ordered Balian's wife beheaded before burial, Balian kills him and flees the village.