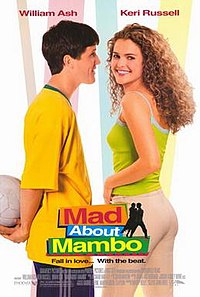 Mad About Mambo is a 2000 romantic comedy film written and directed by John Forte. It stars William Ash, Keri Russell and Brian Cox.

A boy obsessed with football finds his life changing dramatically once he adds a little Samba. Danny (Ash) plays on the football team at the all-boys Catholic school he attends in Belfast. Danny's three best friends, who also play on the team, all have different ambitions for their lives. Mickey (Maclean Stewart) wants to be a fashion designer so he can get rich and date supermodels. Gary (Russell Smith) wants to become a magician so he can get rich and meet beautiful women (and presumably saw them in half). And Spike (Joe Rea) likes to beat people up, so he wants to become a mercenary and do it for a living. But Danny dreams of making football his life.