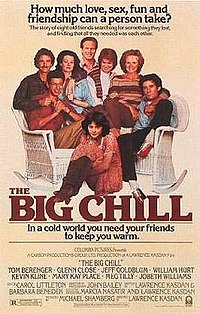 The Big Chill is a 1983 American comedy-drama film directed by Lawrence Kasdan, starring Tom Berenger, Glenn Close, Jeff Goldblum, William Hurt, Kevin Kline, Mary Kay Place, Meg Tilly, and JoBeth Williams. The plot focuses on a group of baby boomers who attended the University of Michigan, reuniting after 15 years when their friend Alex commits suicide. Kevin Costner was cast as Alex, but all scenes showing his face were cut. It was filmed in Beaufort, South Carolina.

Harold Cooper is bathing his young son when his wife, Dr. Sarah Cooper, receives a phone call at their Richmond home telling her that their friend Alex, who had been staying at their vacation home in South Carolina, has committed suicide.