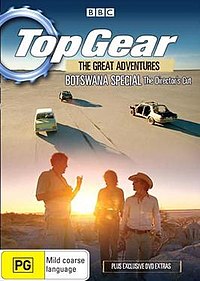 Top Gear: Botswana Special is a full-length, special edition episode for BBC motoring programme Top Gear, and was first broadcast on BBC Two on 4 November 2007, as part of the fourth episode of Series 10. The special sees hosts, Jeremy Clarkson, Richard Hammond and James May, travelling across to Botswana with a car that each had bought in Africa for less than £1500, to prove that they can be better than SUVs for driving up "leafy country lanes". The Botswana Special was released as part of a 2-disc DVD boxset alongside the Top Gear: Vietnam Special on 23 March 2009.