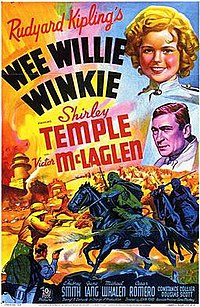 Wee Willie Winkie is a 1937 American adventure drama film directed by John Ford and starring Shirley Temple, Victor McLaglen, and Cesar Romero. The screenplay by Julien Josephson and Ernest Pascal was based on a story by Rudyard Kipling. The film's story concerns the British presence in 19th-century India. The production was filmed largely at the Iverson Movie Ranch in Chatsworth, California, where a number of elaborate sets were built for the movie.

During the British Raj, Sergeant Donald MacDuff escorts Joyce Williams, an impoverished widow, and her young daughter, Priscilla, to a remote military outpost on the northern frontier of India, to live with her stern father-in-law, Colonel Williams. Along the way, they witness the capture of notorious rebel chief Khoda Khan. Soon, Priscilla, nicknamed 'Wee Willie Winkie' by MacDuff, wins the hearts of all the soldiers, especially her grandfather and MacDuff; even Khoda Khan is touched by her visits to cheer him up in his captivity. Meanwhile, her mother is courted by Lieutenant Brandes.