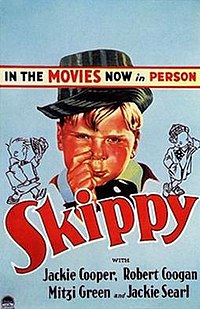 Skippy is a 1931 American Pre-Code comedy film. The screenplay by Joseph L. Mankiewicz, Don Marquis, Norman Z. McLeod, and Sam Mintz was based on the comic strip Skippy by Percy Crosby.

Skippy (Jackie Cooper) is the feisty son of the strict Dr. Herbert Skinner (Willard Robertson) and his wife Ellen (Enid Bennett). Skinner forbids his son Skippy to play in the pauperized Shantytown, because of the unhygenical and criminal surroundings there. But Skippy and his friend Sidney (Jackie Searl) still go to Shantytown where Skippy meets a new boy named Sooky (Robert Coogan, Jackie Coogan's little brother). He saves the small boy Sooky from the much bigger bully Harley Nubbins (Donald Haines). Skippy and Sooky become friends. One day Harley accidentally breaks the windshield of his father's car with Skippy's yo-yo. Harley, who has a very aggressive and brute father, blames it on Skippy and Sooky. Mr. Nubbins (Jack Rube Clifford), who works as a dog catcher, takes Sooky's dog and demands that they pay him for the damages if they want their dog back. The boys gather three dollars by breaking Skippy's savings bank, but Mr. Nubbins accepts it only for his windshield. He gives them three days to get another three dollars for a dog license and he threatens that he'll kill their dog if they don't get the money.