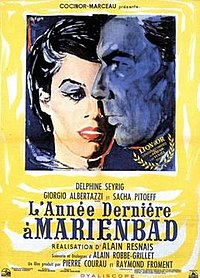 L'Année dernière à Marienbad (released in the US as Last Year at Marienbad and in the UK as Last Year in Marienbad) is a 1961 French-Italian Left Bank film directed by Alain Resnais from a screenplay by Alain Robbe-Grillet.

In an ornate baroque hotel, populated by wealthy couples who socialise with each other, a single man approaches a woman. He claims they met the year before at Marienbad and she asked him to wait a year before deciding on a future together. The woman insists they have never met. The man tries to rekindle what he claims is the tenderness they shared, while she rebuffs him and contradicts his account. A second man repeatedly asserts his dominance over the first man, including beating him every time at a mathematical game (a version of Nim).