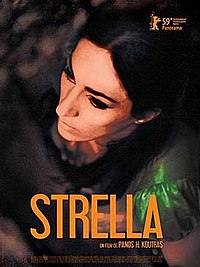 Strella (; international title: A Woman's Way) is a 2009 Greek drama film written and directed by Panos H. Koutras. The plot centres around the relationship between a 45-year-old ex-convinct and a 25-year-old transgender woman.

Yiorgos (Yiannis Kokiasmenos) is released from prison after 14 years of incarceration for a murder he committed in his small Greek village. He spends his first night out in a cheap hotel in Athens. There he meets Strella (Mina Orfanou), a young transgender prostitute. They spend the night together and soon they fall in love. But the past is catching up with Yiorgos. With Strella on his side he will have to find a new way out.