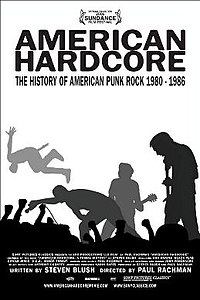 American Hardcore: The History of American Punk Rock 1980–1986 is a documentary directed by Paul Rachman and written by Steven Blush. It is based on the 2001 book American Hardcore: A Tribal History also written by Blush. It was released on September 22, 2006 on a limited basis. The film features some early pioneers of the hardcore punk music scene including Bad Brains, Black Flag, D.O.A., Minor Threat, Minutemen, SSD, and others. It was released on DVD by Sony Pictures Home Entertainment on February 20, 2007.