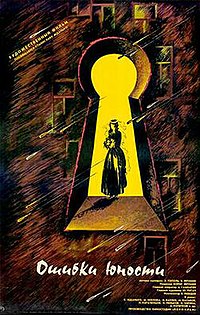 Errors of Youth (, Oshibki yunosti) is a Soviet drama film directed in 1978 by Boris Frumin. It was screened in the Un Certain Regard section at the 1989 Cannes Film Festival. The "critical realism" is reported to have delayed the release; Frumin left the Soviet Union in 1979 and was in 1988 invited back to complete it.

The film recounts the restless life of Dmitri Guryanov after he completes his military service.