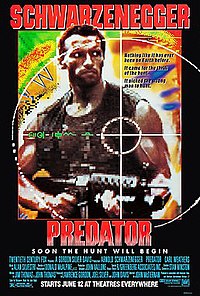 Predator is a 1987 American science fiction action film directed by John McTiernan and written by brothers Jim and John Thomas. It is the first installment in the Predator franchise. It stars Arnold Schwarzenegger as the leader of an elite paramilitary rescue team on a mission to save hostages in guerrilla-held territory in a Central American rainforest, who encounter the deadly Predator (Kevin Peter Hall), a skilled, technologically advanced alien who stalks and hunts them down.

An alien spacecraft deploys a shuttle to Earth, where Vietnam War veteran Major Alan "Dutch" Schaefer and his military rescue team, consisting of Mac, Poncho, Blain, Billy, and Hawkins, are tasked with rescuing a foreign cabinet minister and his aide from insurgents. CIA officer Al Dillon, a Vietnam War buddy of Dutch's, is assigned to accompany the team over Dutch's objections. En route, the team discovers the wreckage of a helicopter and three skinned corpses. Dutch identifies them as Green Berets that he knew and becomes suspicious of Dillon's intentions. The team reaches the guerilla camp and witnesses the execution of a hostage. They mount an attack, killing most of the rebels and several Soviet intelligence officers. Dutch confronts Dillon, who reveals their true mission was to stop a planned Soviet-backed invasion and that the CIA sent the Green Berets weeks earlier for the same mission.