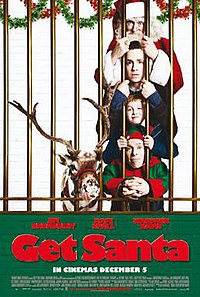 A few days before Christmas, Steve Anderson, a former getaway driver, is released on parole from prison, with his parole officer, Ruth, informing him that she will consider any occasion where he misses his meetings with her as a violation of his parole and send him back to prison. Amid reports of reindeer wandering the streets of London, Steve is surprised when his son, Tom, calls him to claim that he has found Santa in his family shed. Steve responds to the call, but although Santa mentions a time Steve saw a shooting star as a child, he dismisses 'Santa' as a madman and sends him out of the shed. Alone, Santa tries to retrieve his reindeer from police lock-up, but is caught when he tries to catapult one of them out and is sent to prison.