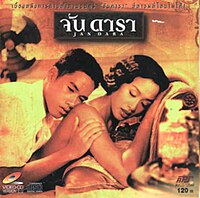 Jan Dara is a 2001 Thai erotic-period-drama film directed and co-written by Nonzee Nimibutr and co-starring Hong Kong cinema actress Christy Chung. It is based on a novel by Utsana Phloengtham. The film premiered at the 2001 Toronto International Film Festival. In Thailand, the film was controversial because its sex scenes tested the censorship bounds of the 1930 Film Act.

Jan is a boy growing up in 1930s Siam in a wealthy, dysfunctional family where sex has a huge impact on everyone's lives. Jan Dara is viewed by his father, Khun Luang, as cursed, since his mother died giving birth to him. The abusive Luang is a womaniser who has sex with many women in his household.