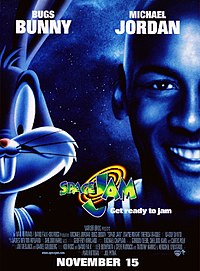 Space Jam is a 1996 American live-action/animated sports comedy film directed by Joe Pytka and starring basketball player Michael Jordan. The film presents a fictionalized account of what happened between Jordan's initial retirement from the NBA in 1993 and his 1995 comeback, in which he is enlisted by the Looney Tunes to help them win a basketball match against a group of aliens who intend to enslave them as attractions for their theme park. Wayne Knight, Theresa Randle, and Bill Murray appear in supporting roles, while Billy West, Dee Bradley Baker, and Danny DeVito headline the voice cast.

In 1973, a young Michael Jordan tells his father that he wants to go to The University of North Carolina at Chapel Hill to play in the championship team, then go to the NBA. A compilation of highlights from Jordan's basketball career, which includes highlights from high school, college, the 1984 and the 1992 Olympics, and the Chicago Bulls, is followed by an excerpt from the 1993 press conference in which Jordan announced his retirement from professional basketball, to pursue a career in baseball, in which Jordan is popular, but less skilled. Meanwhile, in outer space, the amusement park Moron Mountain faces decline. Its owner, Mr. Swackhammer, sends his diminutive minions, the Nerdlucks, to Earth to abduct the Looney Tunes as a new attraction. Upon the Nerdlucks' arrival, Bugs Bunny and the other Looney Tunes take advantage of the Nerdlucks' small stature and challenge them to a game of basketball. Through a documentary of basketball, the Nerdlucks learn that the sport's best players are employed by the NBA, and accept the proposal. After stealing the talents of NBA players Charles Barkley, Shawn Bradley, Patrick Ewing, Larry Johnson and Muggsy Bogues, the Nerdlucks transform themselves into the large, muscular, and talented Monstars and easily intimidate the Tunes, prompting Bugs to seek professional aid.