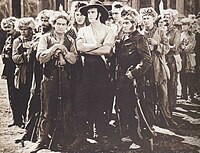 Martyrs of the Alamo (also known as The Birth of Texas) is a 1915 American historical war drama film written and directed by Christy Cabanne. The film is based on the historical novel of the same name by Theodosia Harris, and features an ensemble cast including Sam De Grasse, Douglas Fairbanks, Walter Long and Alfred Paget. Fairbanks role was uncredited, and was his first role in film, although his first starring role, in The Lamb, was released prior to this picture. The film features the Siege of Béxar, Battle of the Alamo and Battle of San Jacinto.