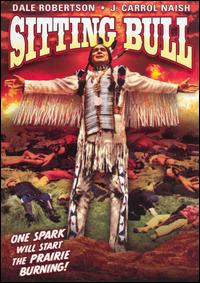 Sitting Bull is a 1954 Eastmancolor Western film directed by Sidney Salkow and René Cardona that was filmed in Mexico in CinemaScope. In a greatly fictionalised form, it depicts the war between Sitting Bull and the U.S. forces, leading up to the Battle of the Little Bighorn and Custer's Last Stand. It was the first independent production to be filmed in the CinemaScope process. Featuring sympathetic portrayals of Sitting Bull and Crazy Horse, The New York Times called it a "crazy horse opera".

Major Robert Parrish (Dale Robertson) of the 7th Cavalry is considered by some to be his own worst enemy because he's not a "team player". Formerly one of the youngest Colonels in the Union Army during the American Civil War, he is now a company commander under Lt. Colonel (formerly Brevet Major General during the Civil War) George Armstrong Custer (Douglas Kennedy). His fiancée Kathy (Mary Murphy), daughter of Parrish's commanding general, breaks off their engagement because he has not risen in rank.