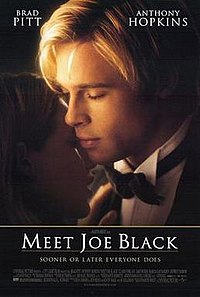 Meet Joe Black is a 1998 American romantic fantasy film directed and produced by Martin Brest, and starring Brad Pitt, Anthony Hopkins, and Claire Forlani. The screenplay was written by Bo Goldman, Kevin Wade, Ron Osborn, and Jeff Reno, and is loosely based on the 1934 film Death Takes a Holiday, an adaptation of the 1924 Italian play La morte in vacanza by Alberto Casella.

Media mogul Bill Parrish is contemplating a merger with another media giant. Meanwhile, his eldest daughter, Alison, is planning an elaborate 65th birthday party for him. His younger daughter Susan, a resident in internal medicine, has a relationship with Drew, one of Bill's board members.