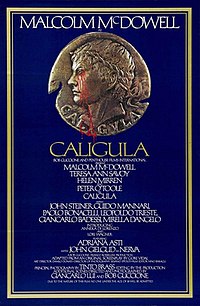 Caligula is the young heir to the throne of his great uncle, the Emperor Tiberius. One morning, a blackbird flies into his room; Caligula considers this a bad omen. Shortly afterward, the head of the Praetorian Guard, Macro, tells Caligula that Tiberius demands his immediate presence at Capri, where the Emperor lives with his close friend Nerva, a dim-witted relative Claudius, and Caligula's adopted son (Tiberius’s grandson) Gemellus. Fearing assassination, Caligula is afraid to leave but his sister and lover Drusilla persuades him to go.