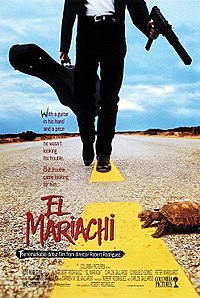 El Mariachi is a 1992 Spanish-language American independent Western action film and the first installment in the saga that came to be known as Robert Rodriguez's Mexico Trilogy. It marked the feature-length debut of Rodriguez as writer and director. The Spanish language film was shot with a mainly amateur cast in the northern Mexican bordertown of Ciudad Acuña, Coahuila, Mexico across from Del Rio, Texas, the home town of leading actor Carlos Gallardo as the title character. The US$7,225 production was originally intended for the Mexican home video market, but executives at Columbia Pictures liked the film and bought the American distribution rights. Columbia eventually spent $200,000 to transfer the print to film, to remix the sound, and on other post-production work, then spent millions more on marketing and distribution.

After breaking out of jail in a small Mexican town, a ruthless criminal, nicknamed Azul, ventures off with a guitar case full of weapons and vows revenge on the local drug lord, Moco, who had him arrested in the first place. Meanwhile, a young musician arrives in town carrying his own guitar case which contains his signature guitar. He hopes to find work in the town in order to pursue his dream of becoming a mariachi like his father.