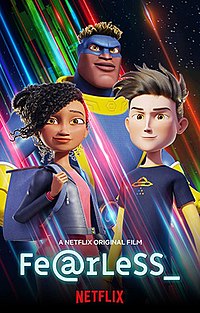 Reid, who goes by the username "Fe@rLeSS_" is a teen video gamer who is an expert at the superhero action-adventure video game Planet Master. While battling in the second to last level of the video game, the video game protagonist Captain Lightspeed reveals he has three children, which he brought to the battle with him. In-game, Reid decides to drop them off at a daycare before he plays the final level of the game, where Lightspeed attaches an "interplanetary communicator" to one of the babies so the daycare workers can call Lightspeed in case of emergency. While in daycare, the antagonist Dr. Arcannis steals the babies and imprisons them on his spaceship in order to attempt to steal their superpowers so he can conquer Earth.