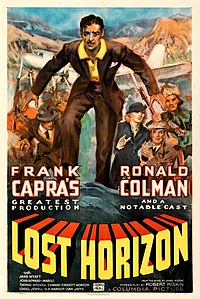 Lost Horizon is a 1937 American adventure drama fantasy film directed by Frank Capra. The screenplay by Robert Riskin is based on the 1933 novel of the same name by James Hilton.

It is 1935. Before returning to Britain to become the new Foreign Secretary, writer, soldier, and diplomat Robert Conway has one last task in China, rescuing 90 westerners in the city of Baskul. He flies out with the last few evacuees, just ahead of armed revolutionaries.