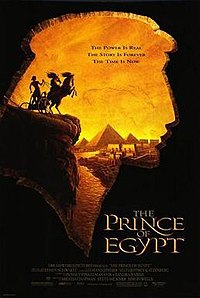 The Prince of Egypt is a 1998 American animated musical drama film produced by DreamWorks Animation and released by DreamWorks Pictures. The first feature film from DreamWorks to be traditionally animated, it is an adaptation of the Book of Exodus and follows the life of Moses from being a prince of Egypt to a Prophet of The Lord, chosen by God to carry out his ultimate destiny of leading the Jews out of Egypt. The film was directed by Brenda Chapman, Steve Hickner, and Simon Wells (in Chapman and Hickner's feature directorial debuts) with a screenplay written by Philip LaZebnik. It features songs written by Stephen Schwartz and a score composed by Hans Zimmer. The voice cast consists of Val Kilmer in a dual role, Ralph Fiennes, Michelle Pfeiffer, Sandra Bullock, Jeff Goldblum, Danny Glover, Patrick Stewart, Helen Mirren, Steve Martin, and Martin Short.

In Ancient Egypt, the enslaved Hebrew people pray to God for deliverance. Pharaoh Seti, fearing that the growing numbers of Hebrew slaves could lead to rebellion, orders a mass infanticide of all newborn Hebrew boys. Yocheved and her two children, Miriam and Aaron, rush to the Nile River, where she places her newborn son in a basket on the water, after bidding him farewell with a final lullaby. Miriam follows the basket as it sails to the Pharaoh's palace and witnesses her baby brother safely adopted by Seti's wife, Queen Tuya, who names him Moses. Before leaving, Miriam prays that Moses will set their people free.