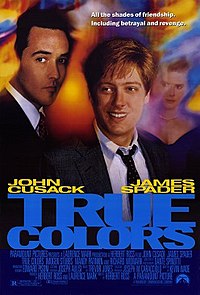 True Colors is a 1991 American drama film written by Kevin Wade, directed by Herbert Ross, and starring John Cusack, James Spader, Imogen Stubbs and (in one of his final film roles) Richard Widmark.

Peter Burton and best friend Tim Garrity nervously await the results of Peter's congressional election with Tim narrating about how this came to be. The two had met seven years earlier following an argument in the parking lot at UVA law school. After discovering that they are to be roommates, the men become close friends. Tim, who comes from an affluent family, plans a career with the Department of Justice, a fact that doesn't sit well with his girlfriend, Diana, the daughter of Senator Stiles. Diana effectively ends the relationship before Tim has a chance to propose. Peter, who is embarrassed by his lower-class roots, plans a career in politics, eventually manipulating his way into a job on a congressman's campaign staff.