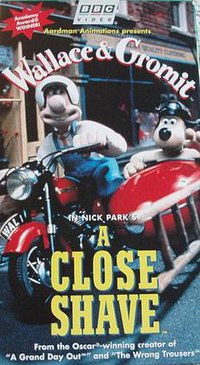 A Close Shave is a 1995 British stop-motion animated comedy film directed by Nick Park and produced by Aardman Animations. It is the third film featuring the eccentric inventor Wallace and his dog Gromit, following A Grand Day Out (1989) and The Wrong Trousers (1993). In A Close Shave, Wallace and Gromit uncover a plot to rustle sheep by a sinister dog.

Inventor Wallace and his dog Gromit operate a window cleaning business. Wallace falls for wool shopkeeper Wendolene Ramsbottom; her sinister dog, Preston, who rustles sheep to supply the shop. After a lost sheep wanders into the house, Wallace places him in his Knit-o-Matic, which shears sheep and knits the wool into jumpers, and names him Shaun. Preston steals the Knit-o-Matic blueprints.