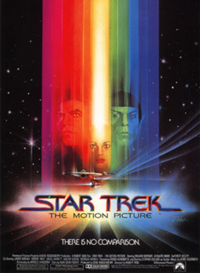 Star Trek: The Motion Picture is a 1979 American science fiction film directed by Robert Wise and based on the television series Star Trek created by Gene Roddenberry, who also served as its producer. It is the first installment in the Star Trek film series, and stars the cast of the original television series. In the film, set in the 2270s, a mysterious and immensely powerful alien cloud known as V'Ger approaches Earth, destroying everything in its path. Admiral James T. Kirk (William Shatner) assumes command of the recently refitted Starship USS Enterprise, to lead it on a mission to save the planet and determine VGers origins.

In the 23rd century, a Starfleet monitoring station, Epsilon Nine, detects an alien entity, hidden in a massive cloud of energy, moving through space toward Earth. The cloud easily destroys three of the Klingon Empire's new ''K't'inga''-class warships when they fire on it and disintegrates Epsilon Nine when it tries to investigate. On Earth, the starship Enterprise is undergoing a major refit; its former commanding officer, James T. Kirk, has been promoted to Admiral and works in San Francisco as Chief of Starfleet Operations. Starfleet Command assigns Enterprise to intercept the cloud entity as the ship is the only one within range, requiring its new systems to be tested in transit.